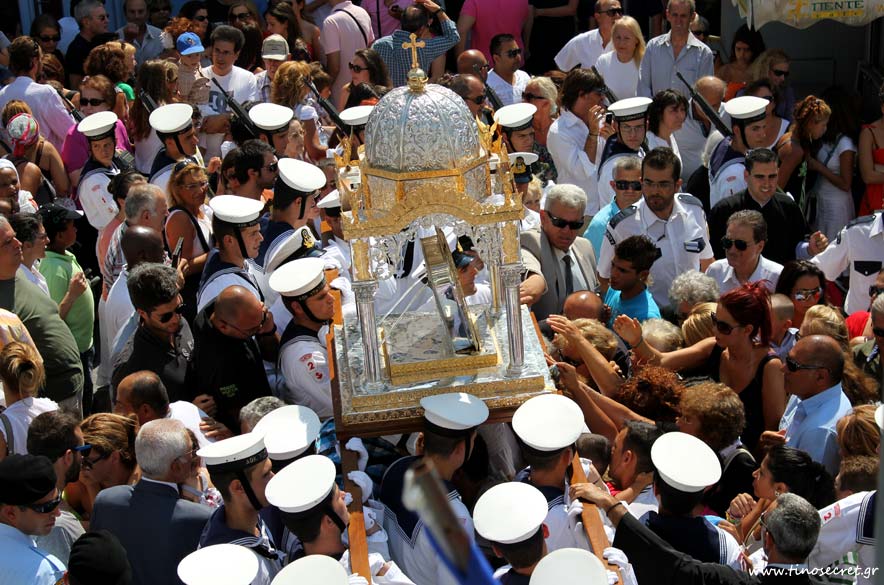 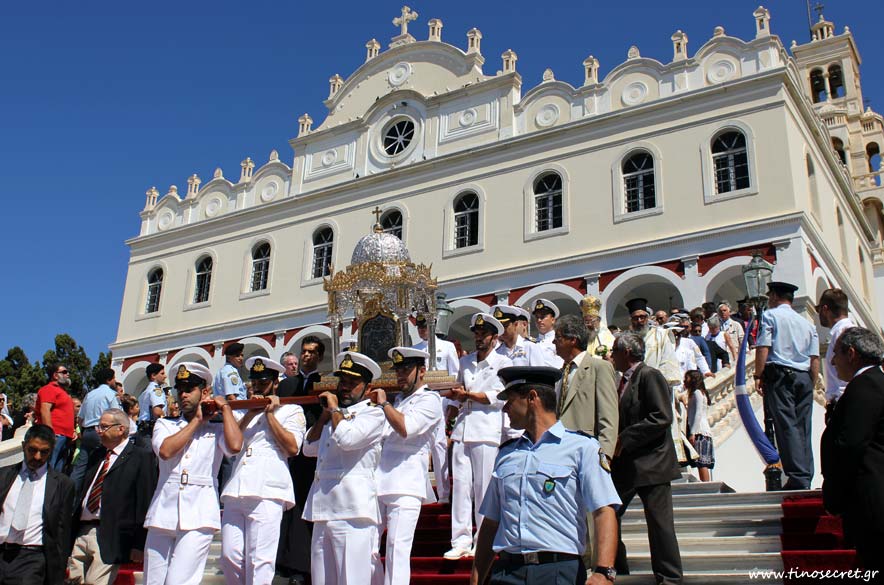 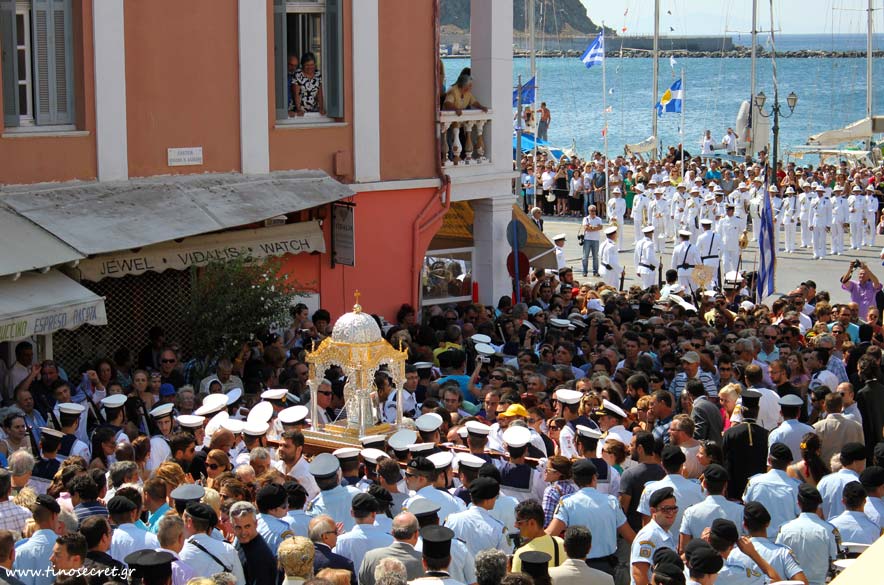 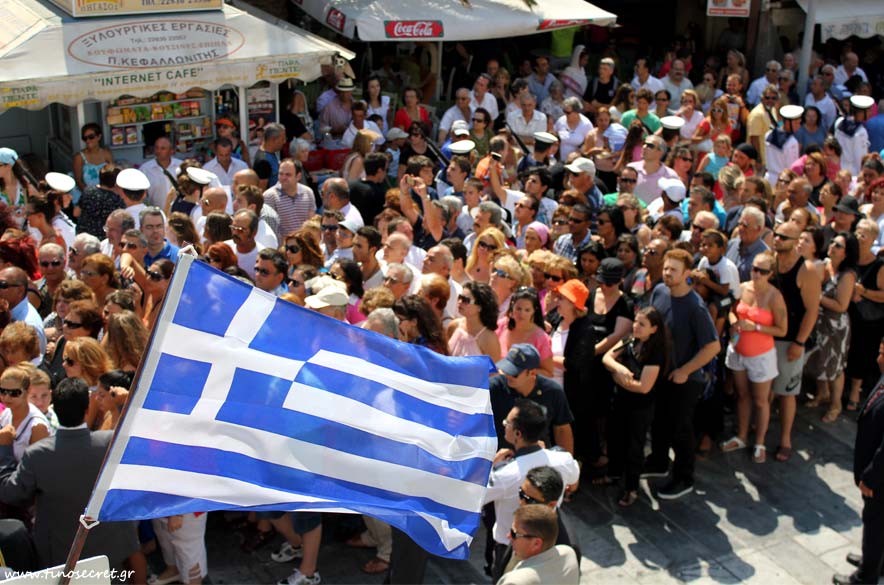 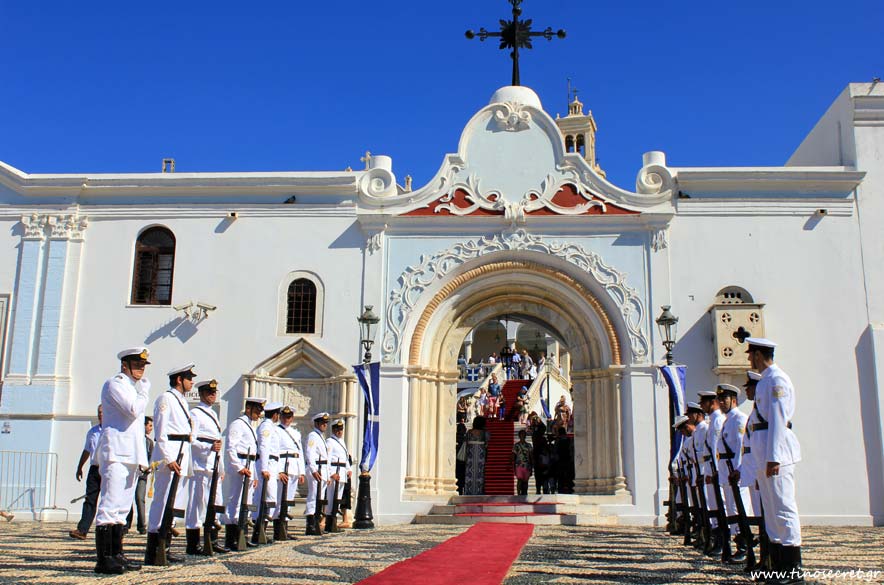 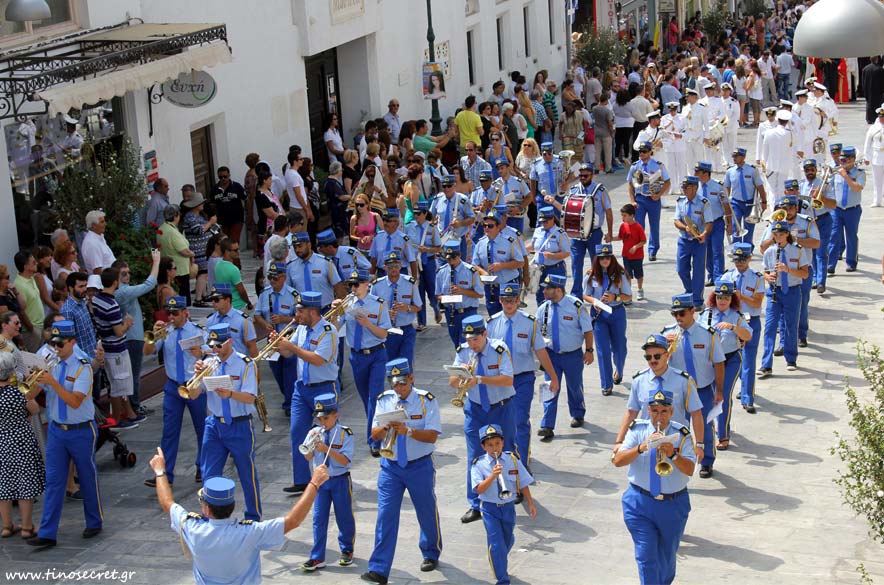 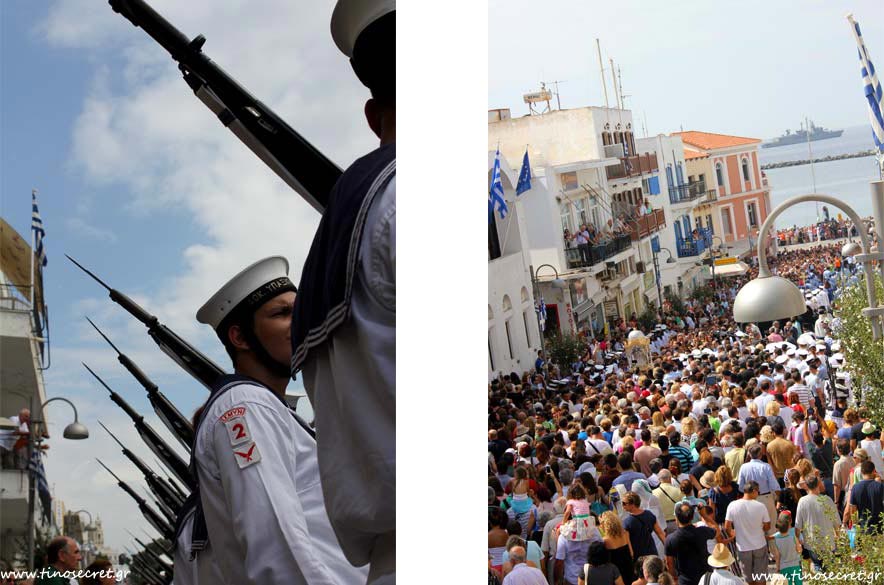 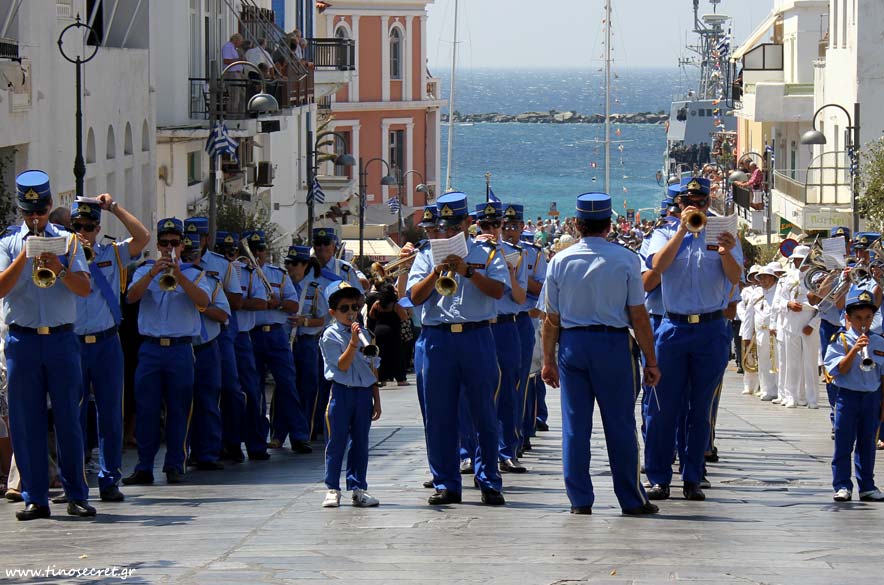 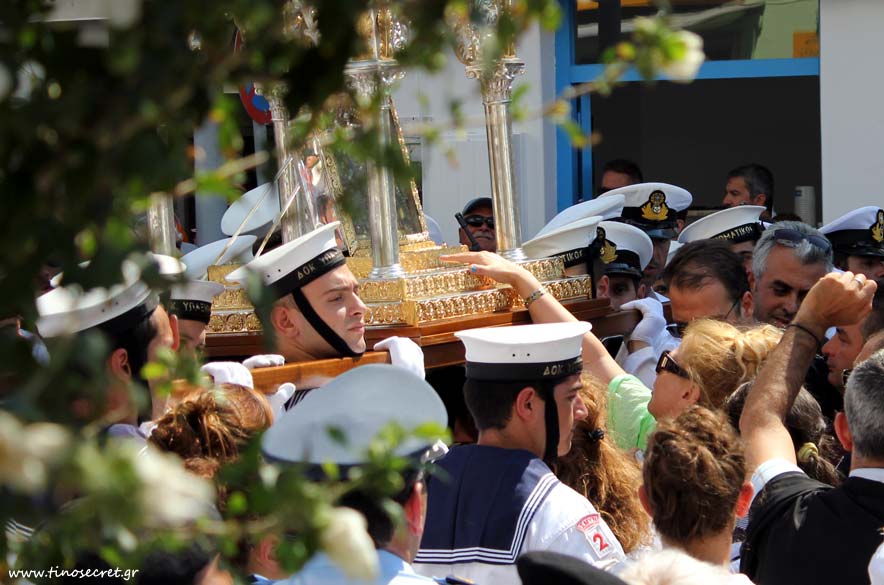 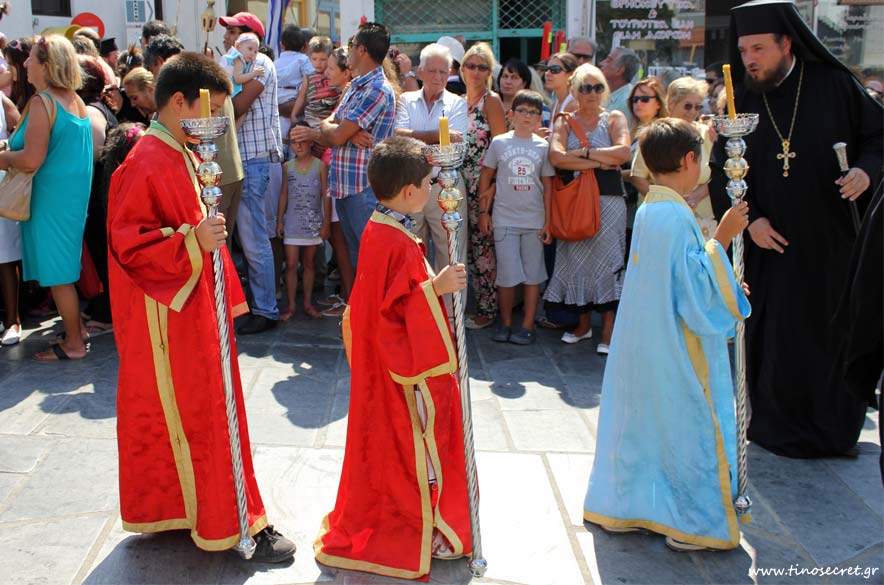 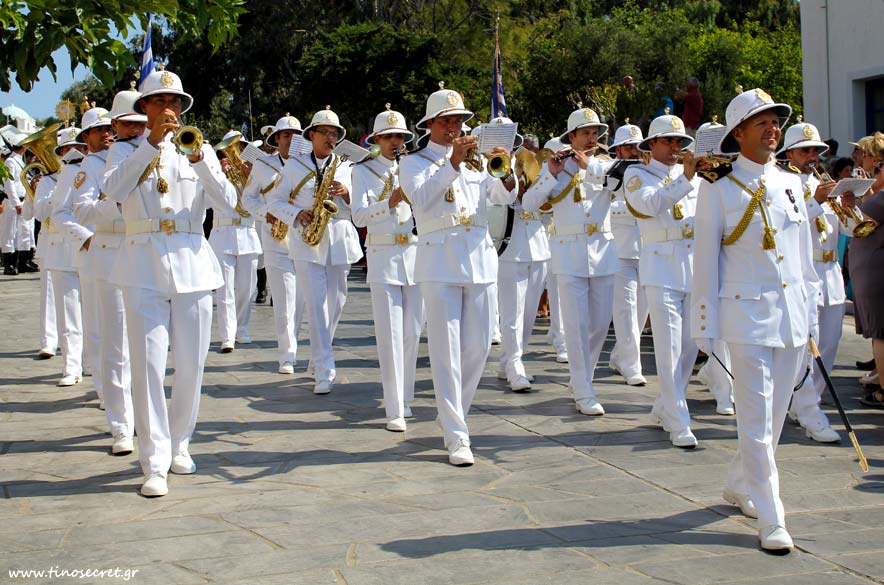 Dekapentaugoustos (August 15th) is associated with the island, even for those who have not ever visited it. Indeed, it is the day with the greatest symbolism and also the biggest celebration on the island.

The double celebration (religious and national) of the Assumption and the anniversary of the torpedoing of Elli (the ship), during the War (1940) take place in Tinos with every honor.

From the beginning to the 15th of August, morning and evening services in Panagia never stop until the eve of the festival, when the Great Vespers and the Divine Liturgy take place.

On the eve of 15 August warships and their crews and also the band of the Navy arrive and anchor in the harbor. A wreath is laid by the Chief of the Fleet at Mausoleum of Elli.Representatives of the government and political and religious leaders participate in the festivities. The town is decorated and lit up at night.

On the day of the feast a Divine Liturgy is being held during which, the Chief of the Navy and government spokesmen onboard the torpedo boats are throwing a wreath at the point where Ellie sank (The torpedoing of the warship “Elli” took place during the Divine Liturgy on August 15, 1940). The honorary cannon shootings, that keep on sounding at the port at the same time along with church bells, come from the Cannon of “Elli” saved from the wreck of the ship and being restored and maintained up today.

Then, the procession of the Holy Icon follows. The Sacred Icon is carried by officers of the Navy and following it are the bands of the Navy and of the Municipality of Tinos playing funeral marches, also honor contingents from all arms and security forces, bishops and a great many people.

Christians from all parts of Greece and elsewhere, gathered in Evaggelistrias street are queuing patiently in order to pass under the Sacred Icon of Virgin Mary (Panagia) and get Her blessing.

The procession concludes at the marble platform, Square Pantanassis where a Prayer is committed and panegyrics are spoken. At last, the procession is accompanying the Sacred Image in the return to the Church of Panagia.

Thousands of Christians from every corner of the Earth, regardless of race, nationality and creed are flocking these days and create ‘a homogenous crowd. Different goals, different backgrounds, different cultures, different hopes, different reasons, different pain – A vow. Everybody is there to worship the same Icon – A miracle.

[vc_row][vc_column][vc_column_text] Panagia Tinou: The Church of …

The w is a small place with great historical significance, in the building complex of the Church of …