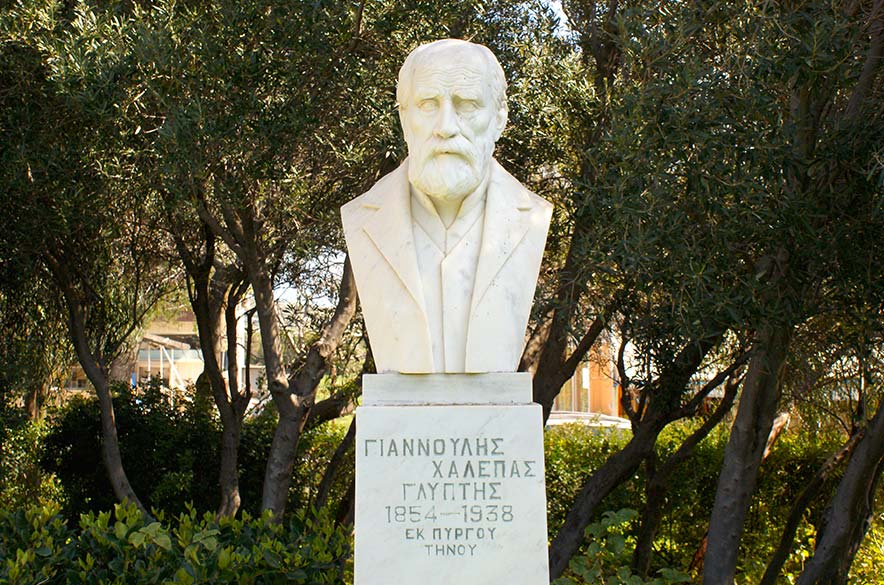 A descendant of famous marble sculptors, Giannoulis Chalepas was born in the village of Pyrgos in Tinos, in 1854. The large marble family business had branches in Bucharest, Smyrna and Piraeus.

Despite his appeal to marble sculpture since when he was a little boy, his father believed that he had to become a good trader and so he sent him to study in Syros. But Giannoulis did not want to compromise with this idea.

From 1869 until 1872 he studied at the School of Fine Arts of the University of Athens. In 1873, he went to study in Germany (Faculty of Fine Arts, in Munich) with a scholarship from the Holy Foundation of Evangelistria and was an apprentice of the classicist sculptor Max Ritter Widnmann.

Reviews for his works such as “The Tale of Sleeping Beauty” or “Satyr playing with Eros” was triumphant. But he was forced to return to Athens because his scholarship was interrupted.

In 1876 he works in Athens in his own studio, in Syntagma Square.

In the winter of 1877, the first signs of mental illness began coming up and he will suffer throughout his lifetime. His confinement in the public mental hospital in Corfu, lasted 14 years.

In 1877, he created the famous piece of art of Greek sculpture, the “Sleeping Beauty.” This magnificent work is placed on the grave of Afentaki’s daughter, in the First Cemetery of Athens. It is rumored that the cause of the attack from his mental illness had to do with the unspoken love for her.

In 1902, and after the death of his father, who had insisted on his confinement, his mother takes him out of the mental hospital and takes him with her to Tinos. However, she believes that art led her son to madness and therefore, she forbids him explicitly to deal with sculpture again. There were even cases in which, he tried to make works with clay or charcoal that his mother immediately destroyed.

In 1916 his mother dies. Then, alone and very poor he is looking after sheep. The stigma of “the fool of the village” is persecuting him but he finds the will and the courage to return to sculpture after such a long absence. With almost no tools, he obstinately seeks the lost time.

Today only 115 sculptures of G.Chalepas’ remain, which are divided into three periods of his artistic creation. The first period (1870-1878), dominated by classicism, covers his youth until the onset of his illness, the second (1902-1930) when he has returned to Tinos after his confinement in a mental hospital, the themes and the materials he uses (clay mostly) change, while the third (1930-1938) covers his last years in Athens.

Giannoulis Chalepas managed to “carve” matter blowing into it a groundbreaking spiritual life. This process could only be worked out within meta-logical frameworks.