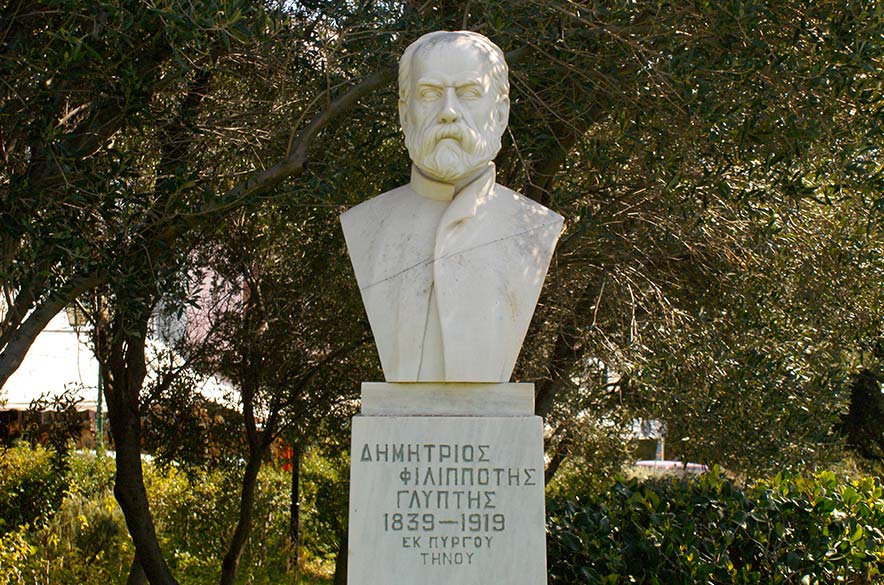 Born in 1834, in the village Pyrgos of Tinos, eldest son of Zacharias Philipotis, a great architect and sculptor, Dimitris Filippotis, from a very early age inherits love for the arts.

In 1847, he goes to Agion oros (Holy Mountain), in order to build the Cathedral of Saint Paul. He will stay on mount Athos for six years, a period sufficient for marking him as an artist.

He moves to Athens to take the high school graduation certificate and then, a scholarship to attend the Academy of Fine Arts in Rome.

Returning to Greece, he founded a marble workshop in Athens, between Omonia Square and Athens Polytechnic. In those days, the image of the center of Athens was completely different. The houses were small, one or two storey, the cabs rare and the few passers- by strictly stopped in admiration, in front of the window of his studio Philipotis, which constituted the “showroom” of his reliefs and sculptures.

His ability to combine realism with idealism was unparalleled. Dimitrios Filippotis creates “beautiful forms” and at times, he has been called an “Anatomy of the human soul and body” or a “luminous star of Art”.

Equally important was his meeting with King George I, who helped him monetarily to participate in an international competition in Rome. There he received the “Mega-General award,” for his masterpiece “The Reaper” which we admire to this day, in the National Garden of Zappion.

Judging by the fact that he was never given the office of professor of sculpture at the University of Athens, we can say that the state did not honor him as much as he deserved. However, graduates of the University, in the same discipline, rushed up to him in order to become his students.

Finally, after his death (1919) he was recognized, so the Greek committee awarded him the grand prize of Literature and Arts, and today many of his sculptures still adorn public spaces in Athens. Examples: Children with grapes (Constitution Square), the Ksylothraysti and the Little Fisherman (Zappeio) the Reaper, the Oporopolis and Artemis (garden of KAT hospital, in Kifissia) and the Lions in the Staircase of Villa Kazouli, in Kifissia.