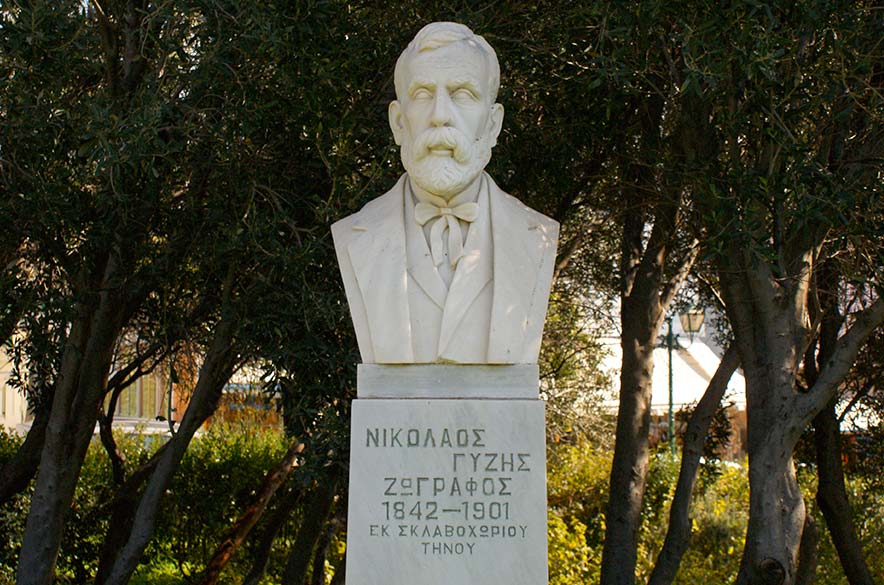 Born in Sklavochorio of Tinos in 1842. His parents were villagers. From the very early age of eight, he used to draw with charcoal. His themes were inspired by his surroundings: animals mostly and peasants ploughing their fields. Today, sketches of his childhood are preserved in the Museum of Tinian Artists.

In 1850, he settles with his family in Athens and begins attending the School of Fine Arts, first as a listener and later, as a student. Soon he attracts the esteem and admiration of his teachers, but he is also praised and wins money prizes.

A scholarship was granted to him by the Holy Foundation of Evangelistria to carry an ardent desire: to study abroad. At the age of 23, he arrives in Munich.

He does not like simply to use a particular style, instead he traces his own personal line, he matches modernity with fixed values and streams of the West with the Greek identity.

His love for Greece brings him back to Athens in 1872. In his studio, the dark green shades are replaced with white and pink colors, “reflect” the rich light, but also, the humanity of Greece.

The constant search for new topics to saturate his creative surplus leads him soon on a tour to Asia Minor for one year, along with his colleague, Nikiforos Lytras. Each movement or posture, any conduct or garment becomes a sketch, a trigger for subsequent processing.

1874 will find him once again, in Munich, where now, with his “suitcases” full of creative stimuli (memories, performances, sketches), he is undergoing one of the most fertile artistic periods. As his fame goes beyond the boundaries of Germany, European critics rave and awards for his work in international exhibitions follow one another. He’s always remained humble, drawing satisfaction from the time of completion of each project.

Death finds him, in 1900, aged 59, and his work passes into eternity by staying up, “over the heads of young children” …

111 years after his death, the exhibition “Nikolaos Gyzis: the great painter” of Theocharaki Institution, created a genuine picture of postmodern aesthetics. Gyzis is truly a “great artist” and therefore, really great the need of turning his work into dowry for future generations.

Sklavochorio village, Tinos: "Being a slave (=sklavos) to free thi…