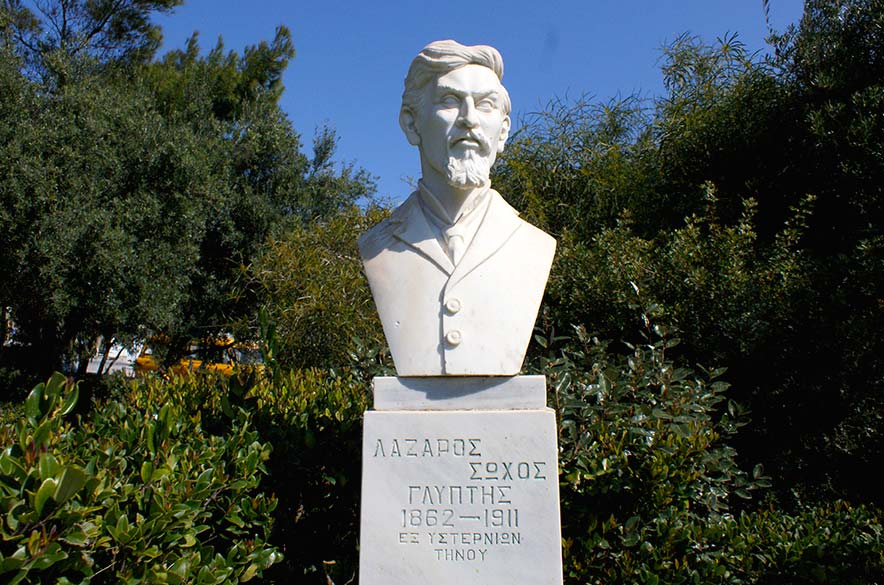 Another very important Tinian sculptor, was born at Ysternia in the year 1862. As a young man he lived in Constantinople/Istanbul, where he worked in the laboratory of marble of his uncle’s while attending courses at the School of Art of the French Guillement.

As a teenager he attends the School of Fine Arts of the University of Athens. One of his teachers is also, an excellent painter from Tinos, Nikiforos Lytras.

With the financial support of Theresa Zarifis-Vlastou and the Foundation of Annunciation of Tinos he goes to Paris, where he completes his studies initially at Ecole des Arts decoratifs and then at the Ecole de Beaux Arts.

After graduation, Lazarus Sohos founded a marble workshop in Paris, gathering there, artists from across Europe. Idealistic as he was and an advocate of the National Idea, he contributes not only to the development of philhellenism in France, but he also organizes a team of volunteers from Philhellenic and Greek students to take part in the battle of Domokos 1897, against the Turks.

It is not a coincidence that the majority of his subjects have to do with Greek nature and history.In 1901, at the invitation of the Archaeological Society, he undertakes welding sculptures in Olympia and in 1902, he was entrusted with the restoration of the Lion of Haironeias.

The statue of Kolokotronis was worked initially in Paris and received the gold award in the international exhibition that took place there, in 1900. A year later, this work was cast in bronze in two bodies which were erected one in Nafplion, at the central square of the city and has been there until today, the other one outside the old parliament in Athens.

An incurable disease robs his life in 1911 at the age of 49. His work, however, imperious and dominating penetrates the centuries, like the look of Kolokotronis reflected at the statue, a great moment of artistic creation of the great sculptor.