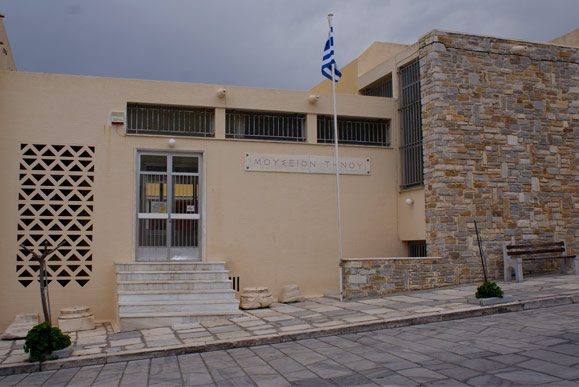 The Archaeological Museum of Tinos was built in the 1960s at the expense of the Archaeological Society, on the main road of Chora leading to the church of Our Lady of the Annunciation (Panagia). Until today, the architectural structure is kept intact, with the museological data of that era bringing up interesting and “nostalgic” memories.

The cultural background of Tinos was formed as early as the 7th century BC. Particularly important is the existence of the laboratory of jars on the island. The relief decoration is of unique style, and the mythological scenes from the cycle of Theogony depict and highlight the beliefs and religious developments of the time. It is the first time relief pottery workshops are being mentioned and what more, such products are probably exported to the neighboring islands (Mykonos, Andros).

In 1950, a great temple (the temple of Demeter and her daughter) of the 7th century BC, comes into light. It was situated at the foothills of Xompourgo and was dedicated to the goddess Demeter, the goddess of vegetation and the dead. It was where the aforementioned storage jars were found.

Displayed in the museum, there are many funerary vases of the Geometric period (10th-8th century. BC) and pottery for everyday use (6th-2nd century. BC). One can even find sculptures, mainly heads of the Hellenistic times and Roman copies, as well.

The exhibition includes original works of carved tombstones, with its main exhibit being that of a relief, showing a garment chest, from the Archaic cemetery of Xompourgo, the highest point of the island that was formerly the center of Tinos.

The atrium of the Archaeological Museum of Tinos, which refers to the “hearth” of the ancient Greek house is basically the benchmark and the main showroom of sculptures and architectural relics from the seaside temple of Poseidon and Amphitriti at Kionia (west of Chora).

A model of the sanctuary is on display inside the museum. The cohesive combination with the “fragments” of the past (from inscriptions, statues, sculptures of sea creatures and deities, to sculptures decorated with flowers and roof pieces embossed with stars) even fragmentarily, awaken the past “shine” and splendor of the sanctuary.

The marble sundial of Andronicus (from Kyristo) is one of the most important findings of the museum (1st cent. BC) which many people have come to characterize as the ancestor of the Antikythera Mechanism. It was in the sanctuary of Poseidon and calculated the solar year, the equinoxes and solstices.

Notable collections are stored in the warehouses of the museum (such as a significant collection of coins) and therefore, there have been many discussions on a possible expansion of the building.

The entrance fee to the Archaeological Museum of Tinos is the smallest possible we find at sites for which the Ministry of Culture is responsible. In fact, it is just symbolic and the staff are always willing to help the visitor. 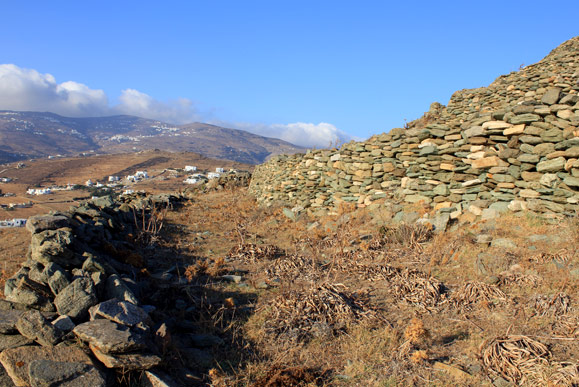