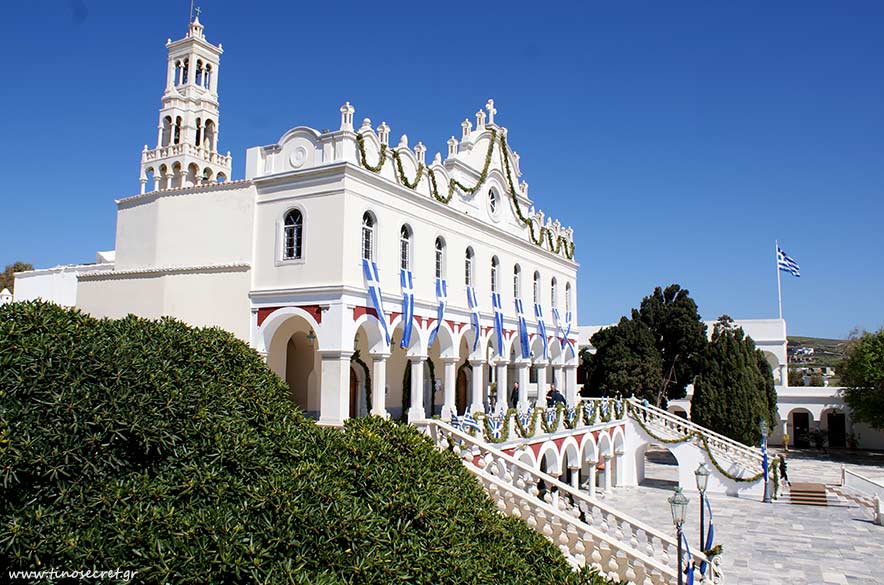 The History of Tinos: Ottoman Times

In 1715 Tinos was the last permanent occupation in the Aegean that had remained in the exhausted but glorious Republic, after having been a ruler of the seas. On June 5, 1715, as part of the campaign of the Ottoman fleet for the recapture of Morea, a powerful military force disembarked on Tinos and besieged the Castle. The deficient guard (50 men), outdated defense facilities and obsolete equipment (out of the 35 guns only 15 operated), and the population’s fatigue itself from the long-standing Ottoman threat, functioned catalytically in the decision of the Venetian commander, Bernardo Baldi, for the surrender of the Castle to the Ottoman Admiral, Janum Pasha. Following the surrender, the Venetian guard and administration left with honors, the besieged residents returned peacefully to their villages and the Ottoman fleet left the island after 15 days of residence, after it had completely blasted the Castle so that it could not be recaptured by his former masters. The official surrender of Tinos to the Ottoman Empire would eventually take place in 1718, with the Pasarovic Treaty. Some 800 inhabitants of the fortress were retired after the disaster, initially in its suburb (Sobborgo – from which the current name of the area), but it would soon lose its importance to the benefit of the developing port of Agios Nikolaos, today’s Chora, which would become the new administrative and economic center of the island in the next decade.

Its accession to Ottoman territory would bring Tinos out of the peculiar economic isolation of the last Venetian period (trade mainly with the West) and will give its human potential, which was strengthened by a significant number of emperors mainly from Crete, to render the island a commercial center of the Aegean Sea. In the new reality that will be shaped in the 18th century, Tinos will experience economic growth and prosperity. New communal institutions are being consolidated, transit trade and craft production (mainly silk and silk production) are being developed, while marble crafts, mainly in Exo Meria, are known to flourish, with workshops of Tinian craftsmen to become famous by building magnificent bell towers and temples across the whole Greece, Asia Minor and the Balkans. Until the outbreak of the Greek Revolution, Tinos will experience a prolonged period of peace (interrupted only by the Russo-Turkish war of the 1870s), the main features of which are the residential and economic development of the new capital and many villages, external trade and the general mobility of the population. Until the beginning of the 19th century, in the Chora of Saint Nicholas, as it was called at the time, there were now 30 merchant houses with connections abroad, and all major European states had permanent sub-trade / commercial agents on the island!

In the uprising of 1821, Tinos will actively participate with the revolutionary flag flying – for the first time all over the Cyclades – on March 31st in Panormos and the Tinos crews manning the Hydra and Spetses warships take part in the Revolution. On January 30, 1823, and while the revolutionary war was breaking out, the icon of the Annunciation of the Virgin Mary, an evangelist of Greek freedom, was found by the Tinian people. The vision of the monk Pelagia, finding the ancient icon, will be immediately considered a divine omen of the revolted Greeks, and many chieftains will rush to the island. This will be the start of the wonderful adventure that will make the island the greatest pilgrimage of Orthodoxy in Greece, with the Church of Megaloharis taking the character of a “Religious Foundation” with wide and rich social and charitable action in the years to come.

30th January marks the "Fanarakia". On this day the Find of the mi…

[vc_row][vc_column][vc_column_text] Panagia Tinou: The Church of …