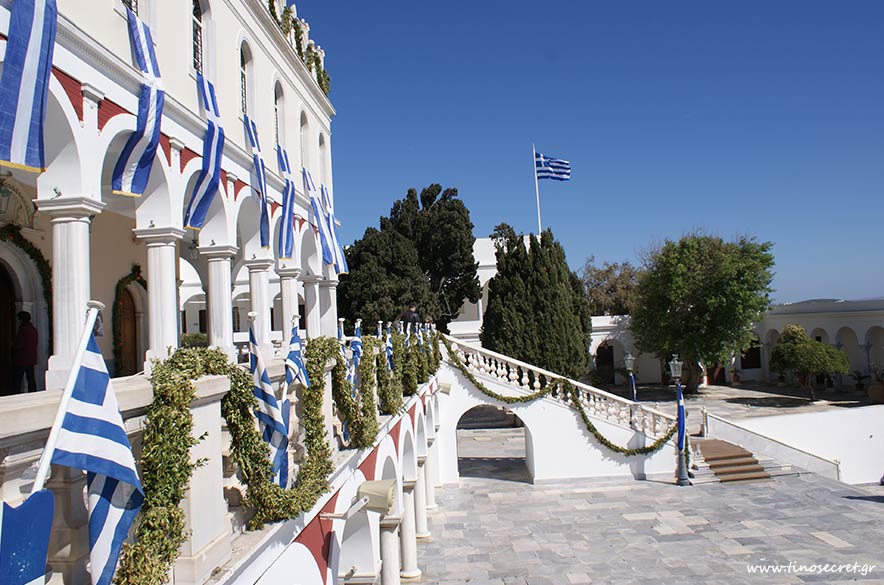 In place of the Church of Evangelistrias, there existed a Byzantine church of St. John the Baptist, which, as it was said, was burned in the Saracen pirate raids, while, in antiquity, the ancient temple was dedicated to Dionysus.

Built in its original form within three years (1823-1826), thanks to the voluntary work of Tinians and financial contributions by believers from every corner of Greece, it is the first remarkable architectural monument of the liberated Greek nation.

This triune temple with its vaulted naves and a dome above the altar, was architecturally supervised by Efstratios Kalonaris, from Smyrna.

The marbles used (from Panormos and Delos) were carved by artists of Exo Meria, having given their best.

The bell tower of 29m, having three floors and resembling to that of Agia Fotini of Smyrna, was restored in 1957 by Ioannis Philipotis.

The mosaic outside the church was made of white and black sea pebbles.

Each one of the hundreds of offerings inside the church, hides its own story.

The contribution of Tinos...

The building complex of...