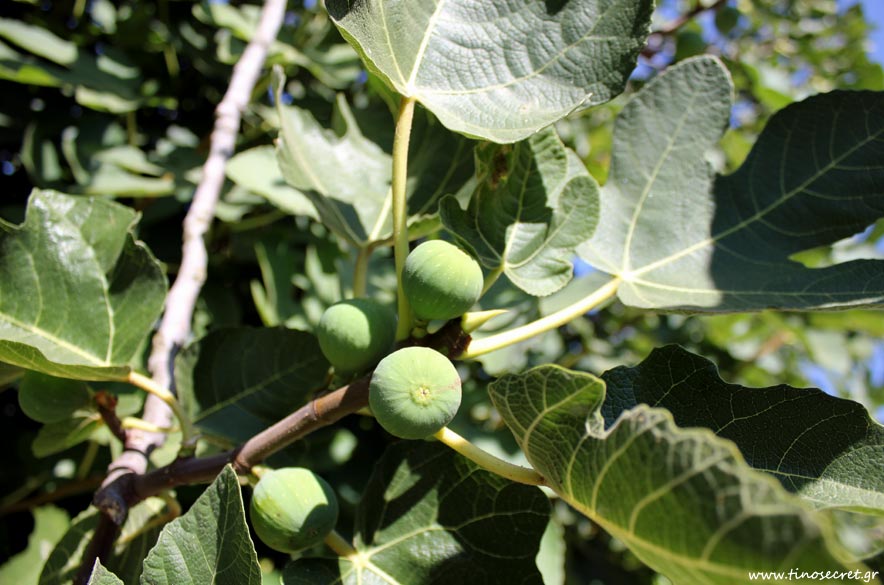 The fig has ever been a particularly important product for Tinos. The kontolata, the glykornioi, the arkounes, the kavourakia, the xinosyka or Basilicata are only some of the varieties of the productions. Harvested in August, some quantities -destined to accompany the raki- are dried.

The vines, grown in areas protected from the winds, provide delicious grapes of different varieties such as the potamisia, the mavropotamisa, the rozakia, the antirites, the platania, the koumariana and many more.

The caper is part of the identity of Tinian cuisine. Collected in early summer and placed in brine, where it remains for a month. During summer, in the Festival of Caper, you will be treated with dishes based on it. The Kritamos resembles in taste with capers and has the saltiness of the sea, as it is resistant to wind and wave and grows on beaches, or even on rocks.

If you happen to find yourself in the artichoke festival, held every year, you will see how widespread artichokes are on the island and in how ways Tinian housewives are cooking them.

The local tomatoes dried in the sun used to be an appetizer, typical of the island, prior to its being considered a delicatessen.

Mushrooms and their collection is a kind of hobby for Tinians. They grow in large amounts but require knowledge and experience to identify. Try the mushrooms (arnadkies) fried or stewed.

The Alifoni, a kind of radish that usually grows near the sea, called the “sea radish”.

Native herbs and infusions (mint, sage, dittany, thyme, chamomile, oregano, fennel) are everywhere in the mountains of Tinos. This “herbal smell”, coming off the shops selling these herbs, will accompany you all the way along the old road leading to the church of Virgin Mary (Panagia) in Chora.

Traditionally, the pig was...