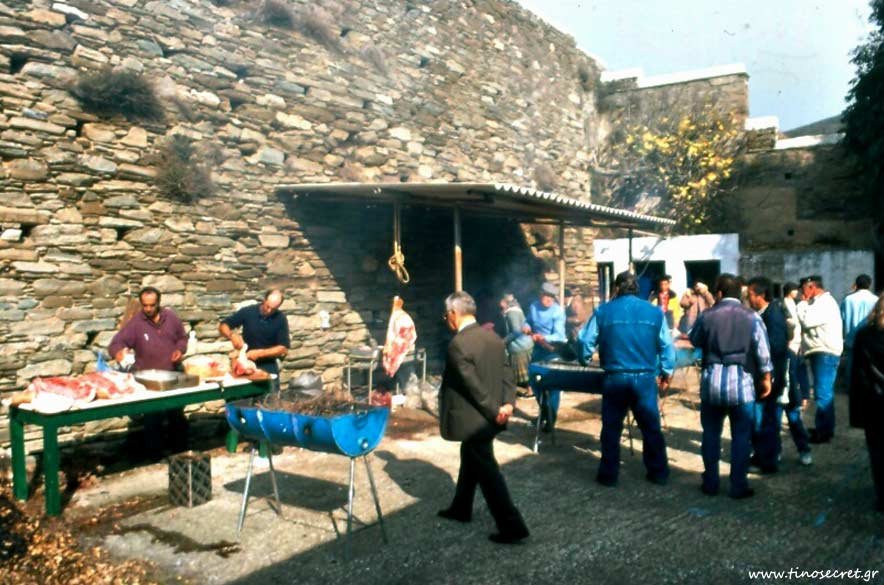 The custom chirosfagia revives in November or December in the villages.

The pig (Chiros in greek) was probably the most important element in the economy of a home, since a pig, weighing about 150-200 kg, was sufficient to meet the annual needs (in meat) of a family

The slaughter of the animal took the form of a ritual and was the occasion for a big party.

Every year, the family would buy and feed their piglet, and when the time came to slaughter it, they invited their fellows to help.

The men butchered and then cleaned the animal amid raki, appetizers and wishes.

Dissecting a pig, they took care not to leave any part of the animal unused. They prepared sausages, louza, the syssira (syglina), salted meat (bacon), and gathered the thick fat (glina).

The kids enjoyed their new balls (from the bladder of the animal) and the animal’s leather would be used for new, waterproof (!) shoes.

Upon completion of the process, the feast began.

The women were preparing the festive meal, which necessarily included braised liver with rice and soup.

Friends and relatives who helped with the preparation were invited to the feast.

It was the time when the landlord opened the barrel, when instruments came up and everyone started dancing, in one of the biggest celebrations of the year.
Choirosfagia lasted 2-3 days.

Today, the procedures may be simplified, but people keep on producing the traditional pork products and certainly in chirosfagia, they maintain the same mood for revelry.

The local custom of Rakizio in Tinos... Raki is the t…

Tinos Meat Products: Traditionally, the pig was a particular…