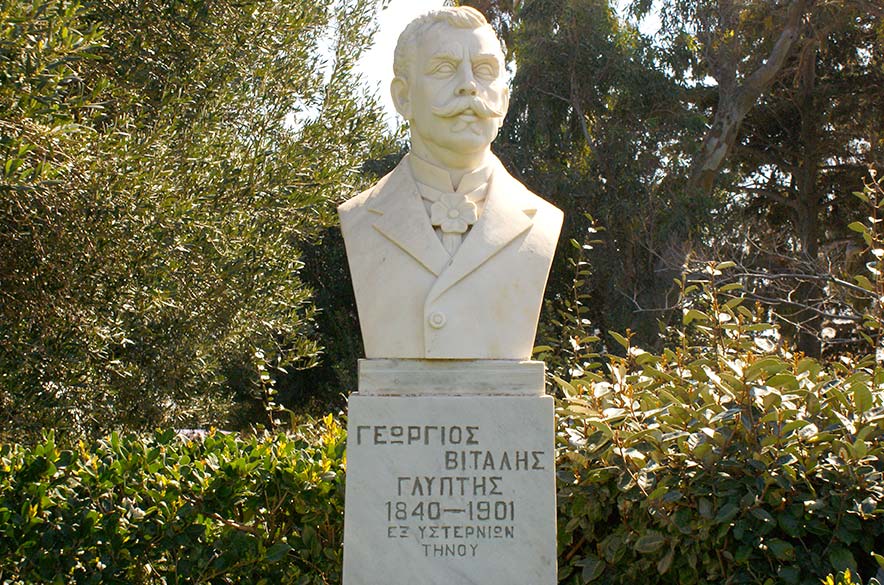 Georgios Vitalis was born at Ysternia of Tinos, in 1840. After graduating from high school, he followed his father to Smyrna in order to help him in his architectural work performed there.

Soon, he realizes that he wants to carve out a different way. He secretly arrives in Athens and splits his days between the marble workshop of his uncles’ (popular sculptors, known as Fytali brothers) and the Polytechnic.

Georgios Vitalis graduated from the University of Athens, and in 1862, when a scholarship was offered to him by the Queen of Greece, Amalia, he started his studies at the Academy of Fine Arts in Munich. He soon prevails there, ranking first and King Ludwig suggests that he takes the seat of professor of Fine Arts at the Academy of Munich.

Once again, he has bigger plans for himself. Honors and titles seem little compared to his vision of the Refined Man through Art. He returned to Greece and founded a marble workshop in Syros, gracing the capital of Syros (Ermoypoli) with numerous sculptures, statues, busts.

Greek Prime Minister Charilaos Tricoupis considers his opinion and advice valuable and his contribution essential for the artistic development of Athens.

A characteristic and vivid example is the statue of Philhellenic English politician Gladstone, situated in the grounds of the University of Athens.

For this purpose G.Vitalis visits England and stays there for three months. The English politician was so much captivated of the personality of the Greek sculptor that he does not stop to correspond with him until the end of his life.

He spends the last two years of his life in Alexandria where he created the statue of Averof. He died in the year 1901.

Sculpture works of his are also exhibited in the Museum of Tinian Artists, Sacred Foundation of Evangelistria.